If you want to cook something that says, “I love you,” Ruthie’s Twice-Baked P is it. Hollow out some baked potatoes, mash the insides with sour cream and cheese, top with butter and bake until beautiful. Potato lovers everywhere will hear the angels sing.

My mother, was a very good cook and I have many special memories of the dishes she made for us and these potatoes were one of them. I have never seen twice-baked potatoes prepared the way she made them, which is the same way I do now.

Typically, twice-baked potatoes are made by baking the potatoes, halving them lengthwise, then topping with goodies and popping them back in the oven. Personally, I find my version to be superior … especially as a dyed-in-the-wool potato lover. Baked potato wonderfulness filled with mashed potatoes? Yes, please.

How to Make Ruthie’s Twice-Baked Potatoes

Start with large russet baking potatoes that have been scrubbed. Pierce the top with a fork (not the side, don’t want the skin to crack later) and give them a rub with some oil and season with salt and pepper. Bake until fork tender then let cool a bit until you can hold them with a pot holder or towel.

Using a paring knife, cut an oval in the top near (but not up to) the edge of the potato, removing the top skin. Hollow out with a spoon, leaving a quarter-inch thick shell. Place the potato insides in a bowl for mashing. Radja, our retired bomb dog, would be happy to inspect yours; he’s good at that kind of thing.

Mash what you’ve scooped out with whatever you like; t I’ve used sour cream and Parmesan cheese. I find a hand mixer very useful for this task. The mashed potatoes should be nice and creamy, just as you’d like to serve them as a side dish.

Stuff the potato shells with the mash and make a little barrier wall around the rim to hold in the butter. You’re basically constructing a baked potato fortress supporting a mashed potato parapet lovingly holding a little pool of butter. (And if on your plate you’ve never made a mashed potato volcano holding gravy lava, well, you just haven’t lived.)

Tuck a pat of butter vertically into the top of the potato and sprinkle with paprika and chives or whatever you like. Back in the oven until heated through, 20-30 minutes.

If you have any extra mashed potato filling, put it in a small greased oven-safe bowl and give it the same treatment with butter and sprinkled seasoning. Heat it in the oven with the potatoes. Somebody who wants a little bit of seconds will be happy to nosh on it.

What to Serve with Ruthie’s Twice-Baked Potatoes

You can make these potatoes using coconut milk and garlic oil. Yummy! 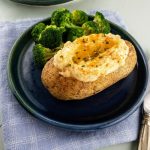 If you have leftover mashed potato filling, place it in a small greased oven-proof bowl and top with butter and paprika.  Heat in the oven along with the filled potatoes.

A long time ago (that seems like yesterday), a 22-year-old found herself living in another country and very lonely for her family and friends. Feeling homesick, she attempted to make the twice-baked potatoes of her childhood for her new husband, only things didn’t go so well. Months of accumulated stress plus these exploding volcanic potatoes led to a long walk alone to simmer down. However, the hubs thought this was hilarious and logged photographic proof. (He devoured the potatoes, by the way. Good man that he is.)

These photos remain on my kitchen bulletin board today as a reminder of, well, life.

Check out my Crispy Hash Browns for more potato goodness!