Some days you need a delightfully roasted chicken. Juicy meat and pure chicken flavor in all its simple glory. If you’ve never done it, roasting a chicken and making a thin silky gravy from the pan drippings might sound intimidating, but it’s actually very straightforward.

And doesn’t “Jus Lié” sound so much sexier than “Pan Gravy?” Leave it to the French to make it so.

I have roasted a LOT of chickens in my years of cooking. Experience has taught me they’re at their best when kept simple. I have experimented with spice mixtures, herb crusts and compound rubbed under the skin.

With the exception of spicy rubs to the skin that yield a great crust and a party of heat in your mouth with every bite, if you’re wanting the chicken itself to shine, simple is best.

I’ve noticed that with every other un-spicy method, the chicken always ended up tasting the same. Like the chicken itself. The herb crusts left an unpleasant feeling of dried leaves on my tongue. The compound butter under the skin doesn’t penetrate the meat but melts into the drippings. All the herbs and lemons I put in the cavity just sat there doing a whole lot of nothing; their flavor not traveling where I desired.

What I love about this recipe for roasted chicken is that it’s so un-fooled-around-with. The meat tastes like delicious chicken. The sauce is heavenly and would probably make even roadkill opossum taste divine.

Choose a chicken to roast

At the grocery store, you’ll see them labeled in two main categories: roasting chickens (generally 5-6 lbs and up) and broiler/fryers (5 lbs and under.) There’s no grand difference, the roasters are simply larger and plump. There is a lot more detail in the world of poultry raising and marketing, but we’re sticking to basics here.

Pick the size that works for you. I made a 5 1/2 lb chicken here and it could’ve fed four people with a little leftover. Let your chicken sit on the counter for about an hour to take off the chill from the fridge.

Preheat your oven to 375°. I’ve roasted chickens at both higher and lower temps and this is a happy medium that won’t burn whatever else is in the pan – a key to your sauce making.

If I’m roasting the chicken with nothing else in the pan (like the aforementioned spice-rubbed bird) I’ll use a higher temp. Not today. We’ll roast this chicken in a cast iron (or stainless) skillet which will greatly aid in cooking the underside and allow us to make our sauce in the same pan.

If you’re unfamiliar with the term, it simply means vegetables and stuff that will add flavor. Roughly chop (1/2″ or so) some onion, celery, and carrots, (the combo otherwise known as mirepoix,) and place them in the bottom of the skillet. You don’t want them to be too small, we need them to pull double duty flavoring our sauce as well as acting as a rack for our chicken.

Throw in a clove of garlic if you like as well as some sprigs of fresh herbs. I like rosemary and thyme; add what you like.

Prep and Season the Chicken for Roasting

I’m a poultry rinser. If you’re not, that’s fine. I keep a very clean kitchen and don’t anything. Rinse or not, the choice is yours. Pat the chicken dry with paper towels.

Rub the chicken with olive or vegetable oil and season thoroughly inside and out with salt and pepper. Placing the chicken breast side up, tuck the wing tips under the main body then tie the legs together. No fancy trussing needed.

Place the chicken on the bed of vegetables. Cut up half a lemon into a few wedges and squeeze over top, if desired. Put the lemon wedges in the pan, too. Pour a cup of chicken broth into the pan. Roast, uncovered, for about 10 minutes per pound then check the temperature with an instant read thermometer at the thigh and breast.

Check for doneness. Thighs should be 165° and the breast 160°. If your bird has a pop-up timer, do yourself and the chicken a giant favor and IGNORE IT! Most of them are designed to pop at 180° which means they’re waving a big banner that reads, “Get your dried up chicken here!” You’re too smart to fall for that now.

Add more time in 10-minute increments as needed. Remove from . (My bird roasted for a little more than an hour.)

When IS That Chicken Done, Anyway?

AN IMPORTANT NOTE: Many home cooks are so afraid of underdone chicken that they cook those poor little things until they’re tough and dried out – then hate that their chicken is always dry.

I truly understand the fear, food poisoning is nothing to fool around with! Furthermore, there are a lot of mixed messages out there from FDA recommendations, poultry producers, and what people like me suggest.

Here’s the thing, the FDA holds the rulebook for commercially sold food and must ensure that if their rules are followed by manufacturers, stores, restaurants and such, people won’t get sick, and that’s a good thing. (They do overreach sometimes to meet that standard.)

The FDA inspection rules require poultry to be cooked to 165°. Some poultry brands will suggest a cooking temperature way beyond the FDA guidelines and I can only think that the reasoning is to prevent lawsuits.

I saw Costco’s whole chickens labeled to be cooked to 185°! Yikes! That’s a great way to ruin that lovely little chicken.

But I see a little bit of pink! It can’t be cooked!

Remember what the temperature of properly cooked poultry is (165°!) and what it looks like. (If it helps, put a little note inside your kitchen cabinet with meat temperatures.)

Underdone poultry not only temps low but will look pink through the meat fibers in the same way a rare steak looks in the center – like uncooked meat fibers, not cooked fibers that have a pink cast.

If your chicken temps properly, don’t be alarmed by some red or pink juices, especially near a bone. That’s just the way it is. You may even have a dribble of bright red juice from the cavity. Also, some of the meat, especially dark meat, will be dark pink when cooked, particularly near the bone. The meat fibers look cooked through, just pink. Once any meat has dried out, there is nothing that can put the moisture back in the fibers.

Rest the bird and make the sauce. Place the chicken on a cutting board to have a rest. Pour the remaining contents of the skillet into a strainer set in a 2 cup (or larger) measuring cup.

Discard the solids. Skim the fat if desired. Add some more stock if needed to reach 1 cup and pour it into the skillet on the stove.

Make a slurry in the measuring cup by dissolving some cornstarch into a little chicken broth. Bring the broth in the skillet up to a boil, reduce to a simmer. Add the slurry and some herbs.

Lightly simmer for a few minutes. Adjust the seasonings if needed, but it will likely be delicious already. Carve your beautiful chicken and serve that silky jus lié alongside.

I served this roast chicken with my Rice Pilaf.

What to do with leftovers?

Roasted chicken leftovers are the gifts that keep on giving all week. Leftovers are only boring when you feel like you’re eating the same thing all the time. They’re not boring when transformed into something else. Use leftover chicken for: 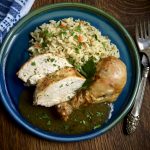 For the pan gravy 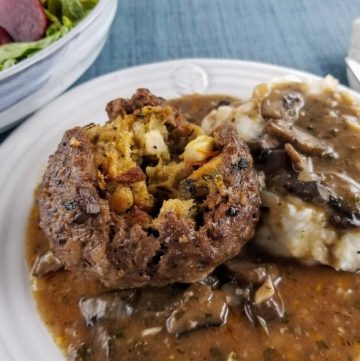