Learning how to skin salmon fillets (or those of any fish) is a basic and useful skill. It will save you money at the fish market and build your kitchen confidence. And it only takes seconds!

A fish fillet is the cut taken down the length of the fish and therefore has a large piece of skin attached. Whereas a steak is a crosswise cut, either taken across the whole fish or across the loin (the big meaty section) of very large fish, like tuna.

Reasons to remove the skin yourself

How to Skin Salmon Fillets

You need a sharp knife whose blade is as long or longer than the fish is wide. I’m using a flexible boning knife today. If you’re in need of a flexible knife, I love this Victorinox Boning Knife. It holds an edge better than more costly knives.

It also helps to have a cutting board as long as your fish, but you can do this directly on a clean countertop. Position the fish close to you on the board with the tail (narrow end) of the fillet opposite your dominant hand (if you’re right-handed, the tail should be to the left.) Move the board to the edge of the counter.

Some salmon has a very thin flange of flesh that runs along part of the long uneven edge. I like to remove that because it can dry out very quickly when cooking. Don’t get rid of it though, it’s very tasty! I simply cook it up separately.

Firmly grip the tail of the salmon using a dry paper towel. It’s very slippery and the towel allows you to have a stable hold.

Hold your knife so the handle is clear of the counter. This allows you to keep your knife perfectly level with the board without the bulk of your hand angling the blade. Do a pretend cut to make sure your fish, hand and knife are positioned properly.

About an inch in, angle the knife away from the tail and make a cut into the flesh to, but not through, the skin.

Once you start cutting, don’t stop!

While still holding the tail, cut swiftly between the flesh and skin of the fillet while pulling on that tail. The tension on the tail makes the cutting much easier!

Pull on that skin! DON’T STOP CUTTING! Use one fluid continuous cut from beginning to end.

Follow through the end of the fillet until the knife is free and clear – all while still pulling the skin. When it’s free, you can pull it completely out with ease.

Ta da! The skinning only takes about 10-15 seconds total. Not too shabby!

Now the fillets are ready for cooking or portioning and freezing. Here you can see I even removed the little bites from the tail piece I was holding.

Here’s a video so you can see just how simple it really is.

How about a yummy salmon recipe? Here’s my Salmon Cream Pasta with Roasted Red Peppers. A family favorite! 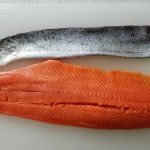 How to Skin Salmon 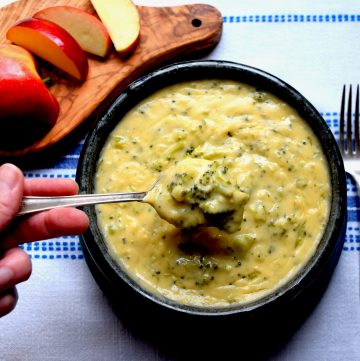