Homemade chicken broth … there ain’t nothing like it when it’s made right. There’s a reason Grandma insisted it cured everything. Besides tasting reeeaaallly delicious, it’s just plain good for the soul.

What the heck is the difference between broth and stock???

The short answer is … nothing. This is one of those things that’s totally up to interpretation. Some will say broth is made with bones, vegetables, and meat, whereas stock is made with only bones and vegetables. Others will say it’s the purpose behind the use, that broth is designed to be a stand-alone dish and stock is something you add to a dish.

Whether you’re making it or buying it, the name truly doesn’t matter. I use the terms interchangeably in my cooking life, for what that’s worth.

Broth … or stock … is nothing more than delicious liquid made from bones and vegetables. Or even just vegetables.

And while we’re at it, the whole Bone Broth concept is nothing new. It’s the same darn broth people have been making since the Mesolithic Era when humans invented pots over a fire; it’s just been marketed afresh.

What it boils down to ( bump) is delicious flavor extracted from otherwise rather useless ingredients – leftover bones and veggie bits. It isn’t complicated and what I’m giving you today really isn’t even a recipe, but more of a procedure. Every single batch of broth is a little bit unique.

What to use to make homemade chicken broth … or stock … or, um … whatever you call it

Homemade chicken broth has a base of chicken bones (or turkey, extra yummy.) Those bones can be whatever you’ve got: backs, necks, wings, whole carcasses, you name it.

They can be raw, cooked, frozen, leftover, even bones from a grocery store rotisserie chicken. I throw in the gristly bits and much of the skin, too. It will all be strained, so no worries. I do not use rotisserie chicken skin. It can leave a very metallic taste.

What kind of vegetables to use?

The vegetables, otherwise known as aromatics, are not the stars of the show. They’re called aromatics because they round out the flavor in a complementary way.

I use onion ends and outer layers, carrot ends peels, celery ends and tops, the dark green portions of leeks, and let’s not forget fantastic parsley stems. A few dry onion peels will give your stock a nice golden hue.

Wilted vegetables are just fine to use! They are wilted because they’re drying out. You’ll be putting them in a big pot of water, so they won’t mind a bit. You just don’t want to use vegetables that have begun to rot. If there are any bad spots, cut them out.

You may be thinking that it’s a giant hassle to collect these ingredients, and who wants to buy all this when you can purchase premade broth? Right you are! I purchase and use premade broth every week.

Here’s my easy-peasy method for utilizing parts that would be thrown away. I keep two gallon-sized freezer bags in my kitchen freezer. One for poultry parts, one for veggie bits. As I’m making dinner and have those onion ends or parsley stems or what have you, I plop them in the vegetable bag; it’s perfectly fine to put new bits on top of the already frozen bits.

Same with chicken parts. If I’m roasting a whole chicken, the neck is usually tucked in the cavity. That neck goes in the freezer bag as well as the rest of the cooked carcass as we’re done with it. Don’t use the giblets! That will make a cloudy broth with an organ funk to it.

It probably takes me six months to accumulate enough parts to make broth. You can also purchase chicken backs & necks (often in the frozen section) as well as wings. Around the holidays, turkey parts are often available.

This is my homely bag of vegetables. I simply dump some in, trying for a somewhat even combination. Don’t have more than 25% of your volume be in your aromatics. (I have another entirely full bag of vegetables in the freezer, I think it’s time to make some vegetable broth.)

Cover with cold water. Today I added my vegetables first, but it’s actually easier to add them after skimming (below.) With your vegetables, add a dried bay leaf or two and a half dozen or so black peppercorns.

Bring it up to a boil, but only for a moment! Reduce the heat to a low simmer. Weird looking beige will begin to form as impurities are released from the bones. Skim off this scum and discard.

If you want a clear broth, don’t stir! I gave this pot a stir a time or two because lots of parts weren’t at all submerged, but I don’t normally do so.

Simmer very gently for approximately 6-8 hours. Cover loosely, ing the lid cracked to let some steam out. If the water level goes too low, add some more. The whole idea here is to gently draw the flavor from the bones.

Place a colander over another pot (or use several bowls) and pour your broth through, allowing it to drain well. You can strain again through a fine mesh strainer if you want to. Discard the bones and vegetables.

If you want to season your broth later as you use it, that works. If you want to season it now, wipe out the pot and pour your broth back into it after straining. Season with salt and allow it to dissolve. The salt will make the flavor of the broth come alive. The broth will take more salt than you might think, though. This batch yielded about 6 quarts of broth and I used several teaspoons of salt.

Cool and refrigerate. Fat will accumulate on the top and is easy to remove when it’s cold and coagulated.

Fresh broth from bones will look like gelatin when it’s cold. That’s a very good thing! It means you’ve got lots of collagen in there. You can keep it refrigerated for 7-10 days, or freeze in portions of your choice for about 6 months. 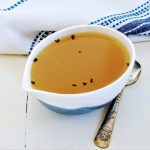 Made from chicken bones and vegetable leftovers, this broth is not only delicious but good for the soul.
Keyword: homemade chicken broth